Leave a Comment | Eddysha Jabulani
Terminix is a new GTK3 tiling terminal emulator. The application, which is currently in beta, allows splitting terminals both horizontally and vertically, with re-arrangeable terminals using drag and drop, and options to save and restore terminal layouts. 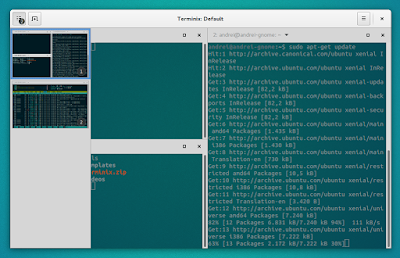 Just like GNOME Terminal, Terminix uses the GTK VTE Widget, so it shares its features, to which it adds its own, like the terminal split functionality, a sidebar that displays terminal sessions with thumbnails (see screenshot above),  support for transparency, and more.

The application follows the Gnome Human Interface Guidelines and as a result, it uses a header bar (client-side decorations), but there’s an option to disable it and use a traditional titlebar.

However, this didn’t work properly in my test under Ubuntu with Unity: after disabling CSD, the application window became completely transparent in both Ubuntu 15.10 and 16.04.

Update: the bug that caused Terminix not to work with disabled client-side decorations was fixed in the latest 0.54.0 version. Here’s a screenshot with Terminix without CSD (in Unity): 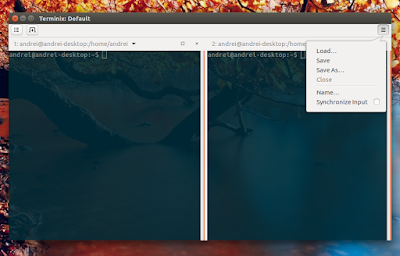 Then launch DConf Editor, navigate to com > gexperts > Terminix and theck the box next to disable-csd.

The application requires GTK 3.14 or later and GTK VTE Widget 0.42, so it only runs on Ubuntu 15.04 (and derivatives: Ubuntu GNOME, Xubuntu, etc.) and newer. The application does not work in Linux Mint 17.x, Ubuntu 14.04, elementary OS Freya, etc.
Below you’ll find a few more Terminix screenshots: 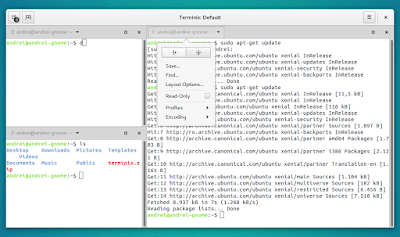 WOGUE (check out their G+ page and YouTube channel) created a nice Terminix video a while back, and even though it’s not the latest Terminix version, it should be enough to gen an idea on how the application works:
(direct video link)

On Fedora 23 and CentOS 7, you can install Terminix via the openSUSE Build Service.

Terminix is currently in beta, so you’ll probably encounter bugs! Report any bug you may find @ GitHub.